What does it mean to be Lutheran?

Well, Lutherans are Christians who follow the work of Martin Luther.  Luther was a monk who lived during the 16th century.  In his studies and worship, he found that there were differences between what he read in the Bible and what the Roman 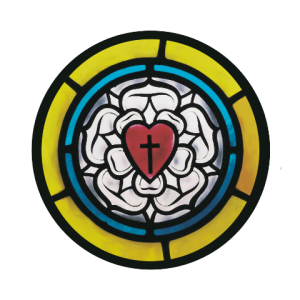 Catholic Church was practicing.  He created and posted a list of 95 theological issues (the 95 Theses) that he hoped would help reform the Roman Catholic Church.

What began as a debate ended in a separation between those who agreed with Luther’s ideas and those who upheld the current teaching of the Catholic Church.  Those who followed Martin Luther were eventually named Lutherans.

Luther’s coat-of-arms is the cross of Jesus Christ, set upon the heart of God, resting on a white rose of purity in a field of heavenly blue, and enclosed in an eternal ring of gold.

A distinct denomination since the 16th century, the Lutheran Church affirms the original, catholic, and apostolic faith as proclaimed in the Holy Scriptures. Lutherans account for nearly one half of the people of the Reformation (commonly called Protestants) in the world. The Evangelical Lutheran Church in America is one of the largest non-Roman Catholic denominations in the United States.

Although commonly lumped with Protestants, Lutherans are evangelical catholics. They emphasize the saving grace of God (evangelical) while maintaining many of the traditions of the western church (catholic).

The Lutheran church celebrates two sacraments: Holy Baptism, through which we are once-and-for-all-time reborn children of God, and Holy Communion, through which we are continually nourished by the body and blood of our Lord Jesus Christ being truly present in, with, and under the bread and wine.

Lutherans give special emphasis to God’s message of “justification by faith through grace” which means we are acceptable to God only because of his unearned love for us, and not because of anything we ourselves can do. Lutheran teachings are founded in the Bible and adhere to the three ancient confessions of Christianity: the Apostles’, Nicene, and Athanasian creeds.

If you are new or returning to the church, you can visit the Evangelical Lutheran Church in America’s website to explore more.

JOIN US FOR WORSHIP!

Our Daily Bread Food Pantry – Sat. 9-10 am. Please stop by our food pantry if you are in need of bread, bakery, meat, and produce. (opening TBD)